On February 7, 2019, the Department of Political Science and International Relations and the Institute of International Economic Relations of Association SA and Ltd hosted a lecture from Christopher Hill FBA, Wilson E. Schmidt Distinguished Professor of International Relations, SAIS Europe και Emeritus Professor of International Relations POLIS, University of Cambridge on Brexit, Britain and the world. Professor Hill, after presenting the UK’s longstanding relationship with the EU, analyzed the decision to hold the referendum, highlighting that strategically it was a mistake, based on wrong assessments of British political and social realities. Moreover, Prof. Hill stressed that a UK withdrawal from the EU would have a negative impact on the EU, and stressed that London would have to face significant problems, as alternatives, such as for example a special relationship with the USA, are of limited importance. He concluded that while during its EU membership Great Britain had a lot of opt-outs, after Brexit, it would be obliged to pursue from the EU significant opt-ins. 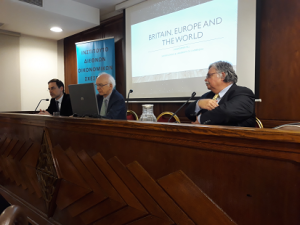